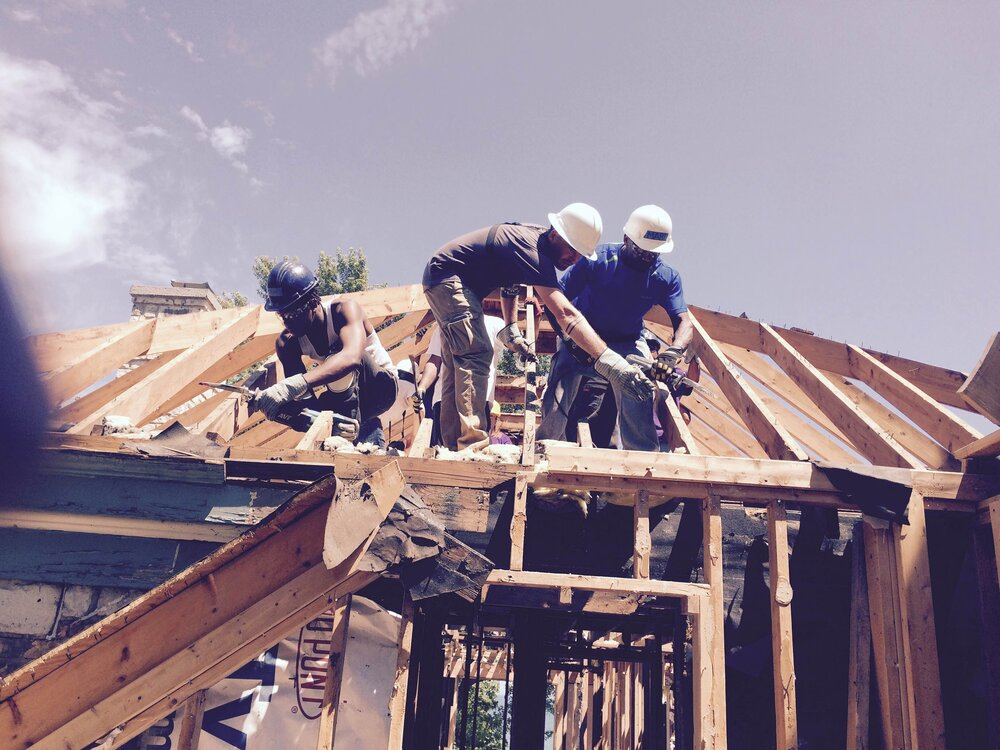 As we’ve been saying all month, the benefits of deconstruction reach far and wide. In particular, we love how deconstruction initiatives and ordinances spur creative and socially-minded business and nonprofit models that benefit preservation, local economies, workforce training, and the environment. The following three stories about the Evanston Rebuilding Warehouse just outside of Chicago, IL;  Urban Ore in Berkeley, CA; and Details in Baltimore, MD, present especially compelling models of social enterprise, where commercial strategies are utilized to advance a public or social good, such as reducing unemployment or improving environmental sustainability. Profits are reinvested in the mission, rather than distributed to external shareholders. Read more about each of these efforts and other deconstruction-related initiatives in our full report.

Entering into the world of deconstruction and reuse as a preservation professional was an intentional industry leap for Carla Bruni. Carla, a former PlaceEconomics team member, had long been focused on work at the intersection of historic preservation and green building, but she wanted to shift more towards the materials side of sustainability. In 2014, she began working for a non-profit outside of Chicago called the Evanston Rebuilding Warehouse (ERW).

ERW is a non-profit organization that “promotes the reduction of waste in landfills through sustainable deconstruction and renovation building practices.” They store and sell reclaimed building materials at their warehouse and any proceeds support their workforce training program, a paid career training initiative that teaches deconstruction methods and other skills. The model helps supply quality recycled materials to the community at a reduced cost, making them more accessible, and helps grow a workforce with the skills necessary to support the growing deconstruction industry.

The ERW’s 13,500-square-foot warehouse is perpetually packed with reclaimed flooring, vintage architectural features, high-end appliances, built-in hutches, interior and exterior doors, and pretty much anything non-structural in good condition. Carla’s interest in this industry grew from a desire to understand what it takes to make materials more affordable for restoration projects. Often, “replacing like with like,” an approach encouraged by preservationists, is simply a luxury many can’t afford.

Because the ERW is a nonprofit, materials donations are tax deductible––a benefit for many are contractors with a regular supply of materials they are looking to get rid of but don’t want to throw away. Even better, the warehouse does not spend any money purchasing these donated materials, so they can charge what they want, passing the savings on to their customers and making preservation and restoration more affordable and accessible.

Urban Ore does not do architectural salvage or deconstruction jobs. Instead, they salvage what has already been thrown away, which is to say, they salvage at the dump. Thanks to a contract with the City of Berkeley, Urban Ore’s crew pulls an average of three tons of materials a day out of the regional transfer station. That material is transported back to their warehouse, where it is cleaned and resold for reuse or recycling. Last year, they salvaged a whopping 826 tons!

Max Wechsler joined Urban Ore in a managerial role four years ago. He had been doing salvage work for years before, but once he learned about the work being done at the transfer station, he knew it was his mission to continue this legacy and eventually expand it. Being permitted to salvage in this way is highly unusual because in addition to the numerous safety concerns that come with hauling and disposal work, this kind of access is usually blocked by the unions that operate at the transfer stations. Berkeley is unique due to an extremely progressive municipal code from 1976 that mandated this form of salvage.

“This June, the City of Berkeley renewed our contract, but an important change happened––we  are now being paid a salvage service fee of $47.74 per ton by the City, which is what they pay Waste Management, Inc. to send these materials to the landfill,” explained Max, “They recognize that recycling and reuse services aren’t free…they involve a lot of labor. We create 30-40 jobs out of what would otherwise just require a handful of people using heavy equipment. There are also important economic, environmental, social, and community benefits.”

Four years after the housing crash of 2008, the City of Baltimore received 10M to spend on demolition. Jeff Carroll, who had recently started a deconstruction enterprise called Details at Humanim, the non-profit where he worked, and his colleague Cindy Truitt, wanted to figure out how this money could fund building deconstruction, rather than just demolition. To do so, they needed to prove that it could be done for a similar price and at a relatively quick pace. They approached the City of Baltimore with their idea, and ultimately won a contract to proceed with their vision.

Part of their was to provide employment opportunities; at the time, Baltimore’s unemployment rates ranged from 20-25%. “You’re really doing a lot more than just taking down houses, ”Jeff explained. “We were able to hire a bunch of people who nobody wanted to hire from the toughest neighborhoods in Baltimore; people who were facing significant barriers to employment such as long-term unemployment, minimal training, former incarceration, and the overall impact of structural racism.”

The Details crew salvaged mostly brick and lumber and built a mill shop to turn the reclaimed wood into dimensional lumber. This helped increase demand and also offered more workforce training opportunities. A warehouse was established to sell the reclaimed materials, named Brick and Board, a separate entity from Details, but still under the Humanim umbrella.

Jeff explained, “You’re using a lot of the same tools—sawzalls, circular saws, power drills, crowbars, etcetera. The employees have worked with it all and are using these tools to solve problems on site. You can’t predict the issues you’ll encounter when dismantling an old building…They have to complete OSHA 10 training, fall protection training, lead in construction, asbestos recognition, silica awareness, and more.” Those skills translate to nearly any construction-related job, Jeff says, “They could roll into a carpenter’s union and start an apprenticeship right away.”