PresPoll 7 Recap: The Effectiveness and Use of Heritage Conservation

This month’s PresPoll asked about the effectiveness and the use of heritage conservation as a tool for a range of urban strategies. While we didn’t mention it in the survey, these possible roles for heritage conservation came from the New Urban Agenda, which will be adopted in Quito, Ecuador at Habitat III this week. We took language from five of the New Urban Agenda commitments that included cultural heritage and rephrased them for the survey questions.

The majority of our survey respondents came from the United States, but 13% of the responses were international and came from Australia, Canada, India, Latvia, Mexico, Pakistan, Philippines, Russia, and Thailand. 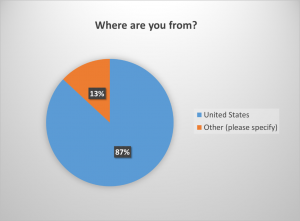 Beyond the location of the respondent we only asked two questions. The first was “How effective is Heritage Conservation…?” 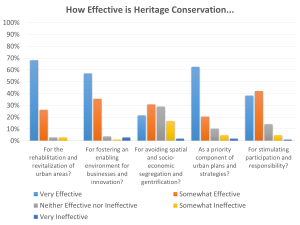 The use of heritage conservation for the rehabilitation and revitalization of urban areas and as a priority component of urban plans and strategies was seen as “Very Effective” by more than 60% of respondents. The role in which heritage conservation was ranked lowest was for its potential ability to aid in spatial and socio-economic segregation and gentrification. However, even in that area, over half of respondents saw that it was either “Very Effective” or “Somewhat Effective.”

The second substance question was: “How often was heritage conservation used in each of those areas?” 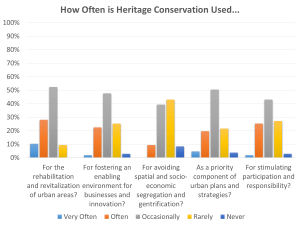 Here, the answers were quite different. Fewer than half of the respondents reported “Very Often” or “Often” for the use of any of these roles for heritage conservation. 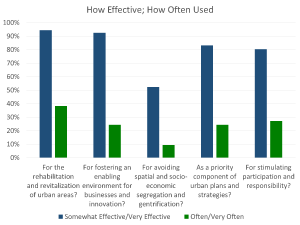 Where heritage conservation was perceived as the most effective – revitalization of urban areas – more than 90% of respondents called it somewhat or very effective, yet less than half that number reported that it was used as a tool for revitalization often or very often. Likewise, three times as many people thought heritage was effective for fostering an enabling environment for businesses and innovation, then said it was frequently used. Similar disparities between “effectiveness” and “use” were found in the other three areas as well.