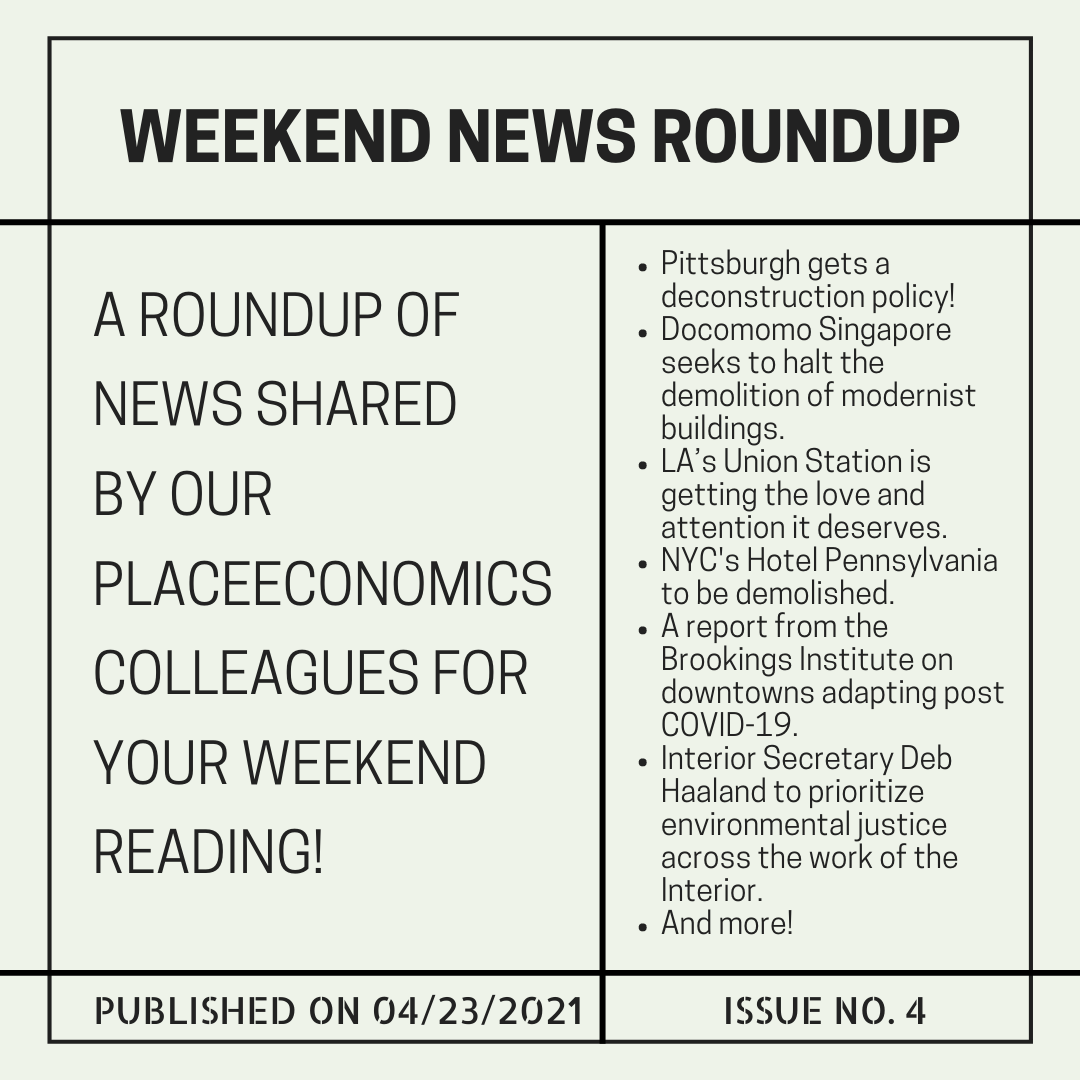 We love to see it: Pittsburgh gets a deconstruction policy! On April 20, 2021, Mayor William Peduto issued an Executive Order for the City of Pittsburgh to develop a unified City-led deconstruction policy. The policy is aimed at identifying deconstruction-eligible structures that may pose a risk or hazard and calls for the City to develop a process that includes taking account of neighbor and community concerns, and focuses on structures in historically Black business districts and low-income communities.

Docomomo Singapore seeks to halt the demolition of modernist buildings. The rapid modernization of the city puts countless heritage buildings at risk. Low Shi Ping lays out the issues and what the newly sanctioned DocomomoSg chapter hopes to do about it. “These modern heritage buildings are physical representations of our city’s phase of nation building, by local architects and developers,” says Karen Tan, treasurer of DocomomoSg. “These buildings… are also a social asset, having accumulated a rich patina of social memories over time, as their uses have evolved through the ages. It is these that give cities a sense of character and a uniqueness that cannot be replicated elsewhere.” PlaceEconomics’s sister firm, Heritage Strategies International, recently completed an assignment to safeguard Modern Heritage buildings in Abu Dhabi, so we are thrilled to see the growing international appreciation for modernist buildings.

LA’s Union Station is getting the love and attention it deserves and its extensive restoration, which began back in 2013 will soon be revealed. According to the LA Times, “The now-gleaming train station will get its close-up this Sunday when the 93rd Academy Awards ceremony is broadcast live from throughout its historic halls.”

NOT SO GOOD NEWS…

And on the theme of iconic train stations, the Hotel Pennsylvania, located across the street from Pennsylvania Station in New York City, will be demolished. Architecturally speaking, the handsome, sturdy building may not compare to the masterpiece that once sat across from it, but it’s hard to imagine that demolition is the preferred outcome given its potential for adaptive reuse. We can’t say we agree with the conclusions made in Christopher Bonanos’s coverage in Curbed, who wrote that “Frankly, the Hotel Pennsylvania is a building that could be made handsome and appealing again, but it’s just not quite significant enough to fight over.” It seems a serious shame to lose more of the interstitial fabric that makes New York feel like New York, but apparently in Manhattan real estate, even the big old buildings leave too much developable airspace untouched.

A report from Brookings looks at how downtowns may need to adapt post Covid-19. The analysis considers recovery data following the Great Recession, and cites remote work and reduced demand for office space, impacts on transit systems and small businesses, and diminishing commercial real estate taxes as factors that may impact city funds.

Secretary Deb Haaland, the first Native American to serve in the role of United States Secretary of the Interior, announced last week that her office seeks to “incorporate diverse perspectives and prioritize environmental justice across the agencies of the Department of the Interior.” The commitment was shared via a secretarial order, which characterized the approach as integral to the department’s focus on fighting climate change. “For generations we’ve put off the transition to clean energy, and now we face a climate crisis,” Haaland told Grist. “It has fallen on those communities: communities of color, poor communities. You can bet that I’m going to do everything I can to help those communities to have an opportunity to build back better.”

Los Angeles seeks to better contextualize and reflect history in its monuments, now and in the future. The city’s Civic Memory Working Group released a 166-page report that outlined important considerations and recommendations that should be observed moving forward. According to the Southern Poverty Law Center, 167 Confederate monuments and symbols across the U.S. were removed in 2020, and it’s within that specific context that the report was conceived. “Our recommendations … flow from the recognition that so many monuments are coming down around the country for a reason, and that they represent visions of empire, state violence and white supremacy that just simply cannot hold,” Rosten Woo, an artist and one of the subcommittee co-chairs, told the LA Times.

Our colleague Rodney Swink attended a “Black Placemaking For the Culture” webinar, sponsored by NCGrowth, the NC African American Heritage Commission and the Conservation Trust for NC. The webinar explored how economically-mindful Black heritage placemaking may serve as an equitable economic development strategy. The session covered implications for equitable and ethical placemaking in regards to Black heritage tourism, the dangers of branding and commodifying culture, establishing rules of engagement and visitor readiness, and more.

A group of storytelling enthusiasts in Kathmandu is bringing people together in an effort to keep cultural storytelling traditions alive. “This is how we document our heritage, our stories; narrating them in a communal setting. We can research and document the origins and stories behind local places, food, culture, dresses, names, musical instruments and monuments,” shares Aswain Bir Singh Tamrakar, one of the nine core team members of the initiative.

Laura Bliss, writing for CityLab, interviews Cameron Bleivins, whose recent book Paper Trails: The U.S. Post and the Making of the American West, “shows how the postal service provided critical infrastructure for the rapid expansion of white settler populations across the West, creating physical touch-points for the U.S. government to gain control over what were largely Indigenous lands.” Complementing the text are powerful data visualizations that use animated maps from the book’s accompanying online project, Gossamer Network, that show how the expansion of the US Postal Service played a key role in colonizing the American west. “I was thinking of different institutions I could use to map how the West was changing over time, and thought I could use post offices as a proxy for where changes were taking place and when,” Blevins tells Bliss, “The more I looked at it, I realized the post office wasn’t this passive proxy — it was facilitating and accelerating this process of expansion.”

And because we went down a bit of a map rabbit hole, we came across this relevant piece of analysis from March, illustrating the connection between redlining and flooding using old insurance maps and climate data for major metropolitan areas in the U.S. “Contemporary maps for flood risk overlap in striking ways with New Deal–era maps used by the federal government to assess risk for mortgage lending…These historically redlined neighborhoods suffer a far higher risk of flooding today, according to new research from Redfin, the Seattle-based real-estate brokerage.”