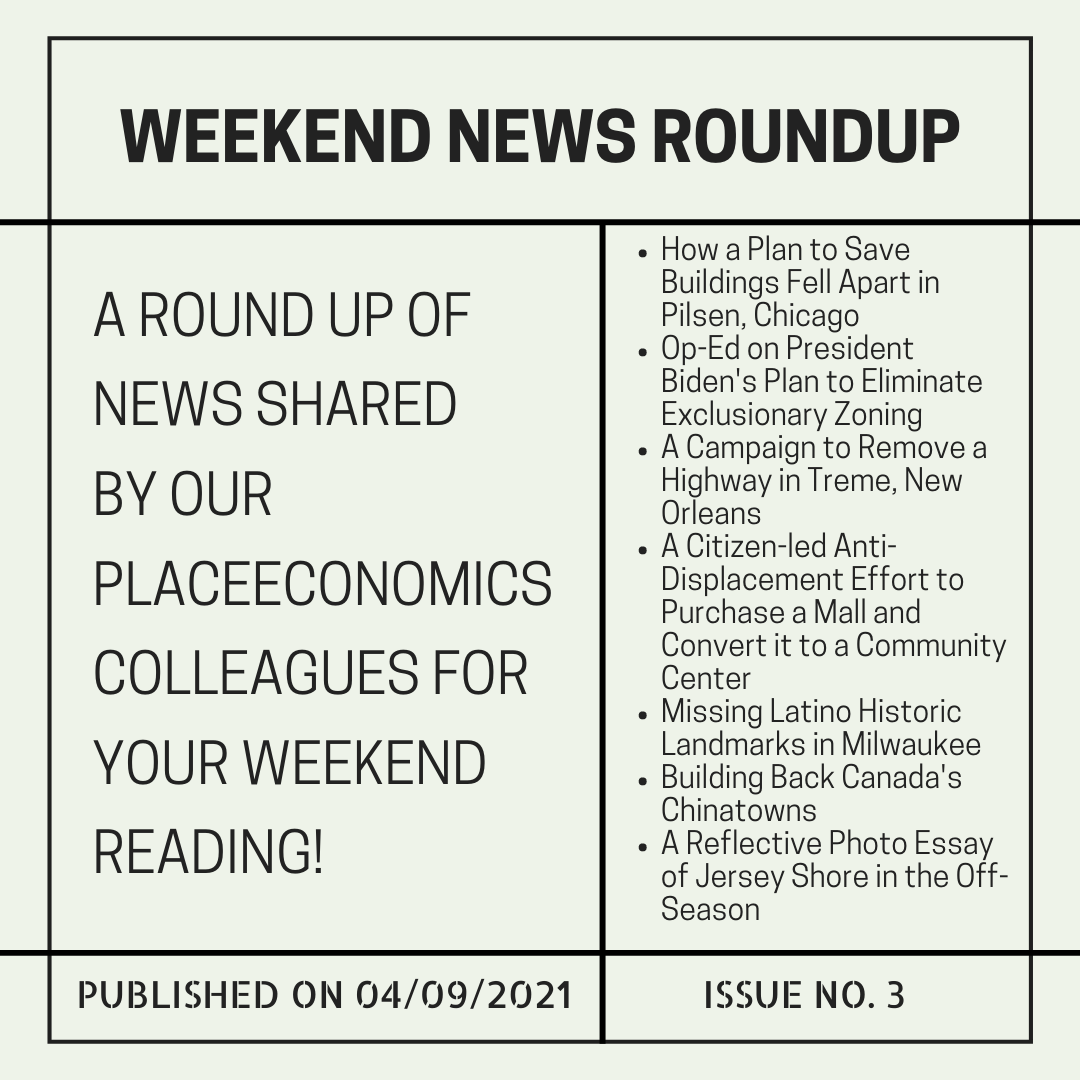 Looking again at the Pilsen neighborhood in Chicago, preservationists Elizabeth Blasius and Zach Mortice reflect on how a failed plan to landmark the neighborhood might serve as an important lesson for the field in an op-ed titled, “How a Plan to Save Buildings Fell Apart.” “Voices from within the working-class Latinx community made it clear that they were unconvinced that landmarking would provide relief from displacement and gentrification. And no wonder: Those are problems that historic districts — and preservation at large — were not developed to address.”

President Biden’s new infrastructure plan will have implications on preservation. In a much-discussed new infrastructure plan released this week. Along with an investment in infrastructure upgrades, the plan calls for the elimination of exclusionary zoning policies like minimum lot sizes, parking minimums, and single family zoning. It would also ease restrictions on new construction. While exclusionary zoning is often identified as a key obstacle to affordability, it’s important to note that opinions on the matter differ, even in pro-housing progressive circles, as this piece published in Shelterforce published last January points out.

In the Tremė neighborhood of New Orleans, Amy Stelly waged a campaign to remove a highway that cuts through her community. That highway, the Claiborne Express, was singled out by the White House as an example of a historic inequity that President Biden’s new infrastructure plan would address. To construct the elevated Claiborne Expressway in 1968, the federal government razed a thriving African American commercial corridor. Biden’s plan calls for $20 billion in infrastructure spending to reconnect older neighborhoods cut off by similar transportation projects.

While not called “preservation” outright, citizen-led anti-displacement efforts feel like one major facet of the future of community preservation. In this incredible story, a group of local residents has raised 28 million dollars to purchase the Baldwin Hills-Crenshaw Plaza mall in Los Angeles with a vision for converting the 41 acre plot into a community hub with local shops, a grocery store, green space, and mixed-use housing. According to NextCity, they’ve also begun acquiring residential properties in the area, aiming to secure thousands, to be placed into the Liberty Community Land Trust, which will provide stable housing that’s protected against speculation and displacement in the historically Black Crenshaw community.

Community groups across Canada are calling for federal help to create a ‘National Action Plan to Build Back Canada’s Chinatowns,’ which they hope will include economic aid, accessible job creation and training, environmental renewal and investments in infrastructure, and funding for the heritage conservation and cultural revitalization of Chinatowns. The impact of the Covid-19 pandemic and anti-Aisian racism are cited by community leaders as key concerns that are having compounding effects on Chinatowns across the country.

The Bucks County Historical Society says its being shut out of a deal to run the Moravian Pottery and Tile Works, a National Historic Landmark and “working history” museum where handmade tiles are still produced in a manner similar to that developed by the pottery’s founder, Henry Chapman Mercer.

The Getty and Los Angeles City Planning have announced the Los Angeles African American Historic Places Project, a project that will identify, protect, and celebrate African American heritage in Los Angeles. The project will include robust community engagement that will create space for meaningful input, drawing upon community-based knowledge of lesser-known histories. The work will also examine traditional preservation practices for systemic bias.

A local reporter found that though the Latino community has had a presence in Milwaukee for over 100 years and makes up 20% of the population, the city has no historic landmarks dedicated to Latino history. Part of the problem is a requirement that nominations have to come organically from the community–a noble effort to ensure that preservation is bottom-up and protects sites that are important to the public, but that tends to exclude communities that don’t have the time or resources to complete the paperwork required.

LAST BUT NOT LEAST

A reflective photo essay looks at the Jersey Shore in the off-season. The photographs by Tyler Haughey and text by Gabrielle Esperdy reflect on the past year on the shore and capture how the confluence of old and new, the quirky vernacular, and the kitschy mid-century motels, and the quiet winter solitude define the landscape.

You can stream a live concert performing Indian classical from the gorgeous, Neo-Gothic Victorian Convocation Hall at the University of Mumbai, thanks to Indian Heritage Society-Mumbai. The concerts will take place on April 10th, 17th, 24th, and May 1st.