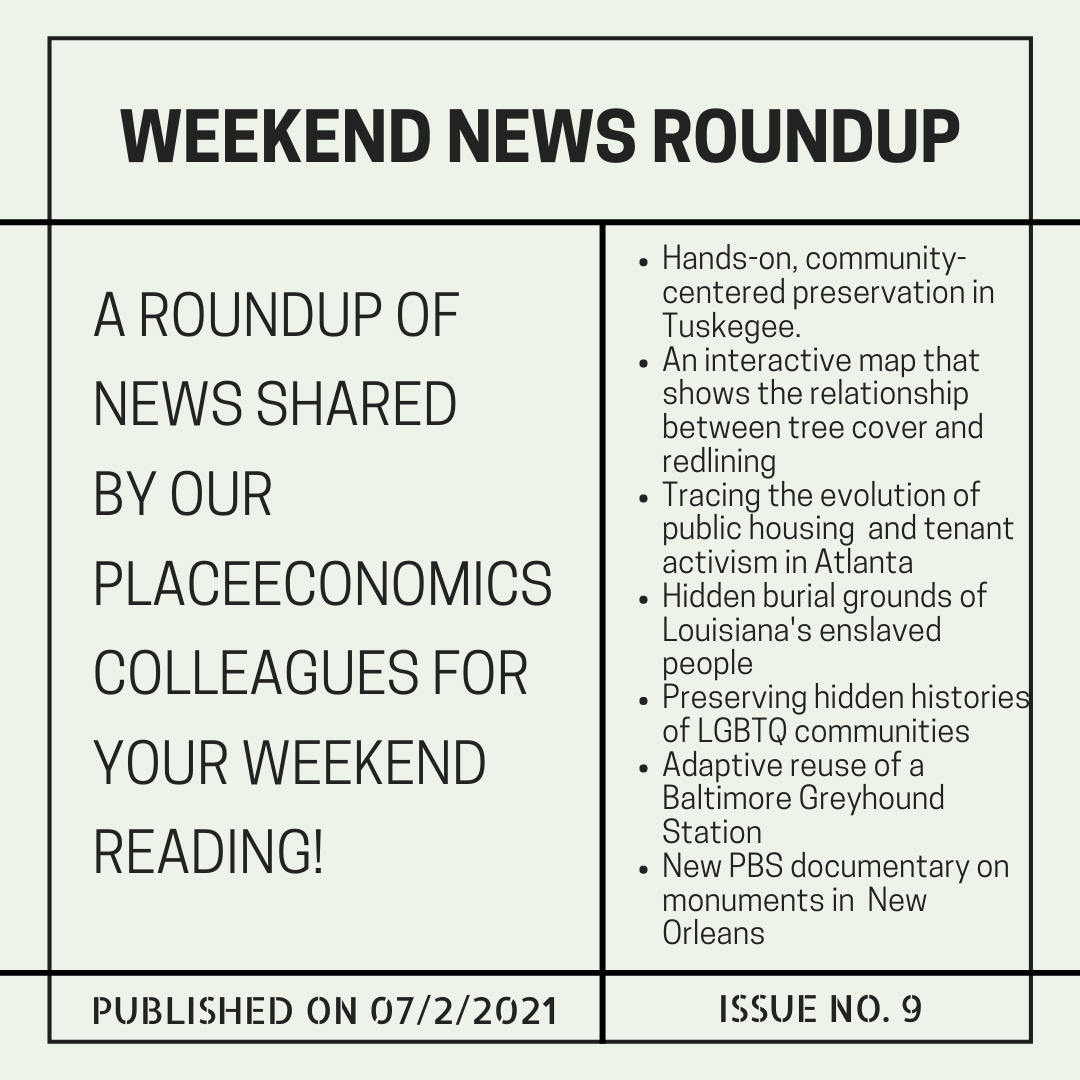 Happy 4th of July to all our readers in the United States! Here are some things you can read, watch, and listen to over your long weekend. Have a safe and fun holiday!

This past week, the House of Representatives passed the INVEST in America Act, which permanently authorized the Historic Preservation Fund and increased its authorization level from $150 million to $300 million. Now, the legislation will move on to the Senate, where it is expected to encounter some opposition. Also, the HTC-GO Act was introduced this past week in Congress. Please urge your Representatives and Senators to support this legislation that would bring more value to Historic Tax Credit projects, improve access, and encourage investment in smaller rehabilitation projects.

In Tuskegee, Alabama, an architecture professor is involving students and the community in preservation projects as a way to build social sustainability. In a town with a high poverty rate and few employment opportunities, preservation offers an opportunity to equip people with valuable skills and “give residents agency over their city.”

Environmentalists in the Palestinian Village of Battir are working to protect a 4,000 year old agricultural landscape under mounting political and ecological stress.

This interactive map and op-ed in the New York Times illustrates the relationship between tree cover and redlining in Philadelphia and other cities. A very relevant read given the heatwave we saw last week. According to the piece, “neighborhoods with a majority of people in poverty have 25 percent less tree canopy on average than those with a minority of people in poverty, according to an analysis of income, employment, age, ethnicity, health and surface temperatures with tree canopy data in 486 metro areas.”

A video compiled by the New York Times shows how historical maps, the descendants of enslaved people, and multibillion dollar petrochemical companies converge in a story about the hidden burial grounds of Louisiana’s enslaved people, and how continued industrial development is putting the historic sites at risk.

Historian and professor Eric Gonzaba is uncovering and preserving hidden histories of LGBTQ communities through a digital project called “Mapping the Gay Guides” using a series of travel guides published by Bob Damron to map historic queer spaces across the United States.

As part of an expansion of the Folded Map Project, artist Tonika Lewis Johnson and sociologist Maria Krysan interviewed 30 people about how they first confronted–and eventually combatted–harmful narratives about Chicago’s South and West sides. Block Club Chicago recently published five of these stories in a new series called “Don’t Go.”

Akira Drake Rodriquez recently spoke with Next City about her research on tenant activism in Atlanta’s public housing developments. In her recent book, Diverging Space for Deviants: The Politics of Atlanta’s Public Housing, Rodriquez traces the development and decline of public housing in Atlanta, she explores how racism and white supremacy isolated the city’s public-housing developments and constrained their benefits, but also created unique organizing opportunities for marginalized people.

Museums across the world are beginning to collect and display artifacts that reflect the experiences of Covid-19. As institutions from Singapore, Vienna, and Washington D.C., contemplate the memorialization of a pandemic that isn’t yet over, they wrestle with the challenges of preserving the paraphernalia that has become commonplace in the here-and-now for future audiences.

Like many of you, we have been watching with heavy hearts as the rescue efforts continue in Miami following the collapse of a 13 story condo building. Mayor Daniella Levine Cava of Miami-Dade County has ordered an audit of buildings 40 years and older to confirm that these older structures have completed a “recertification process,” which ordinarily occurs at 40 year intervals.

In adaptive reuse news, a long-deserted former Greyhound Station in Baltimore will get a second life as a community center and squash court. The space was bought by the nonprofit group SquashWise which will offer after-school tutoring and sports programs and membership opportunities for the community. The station was designed by architect William Strudwick Arrasmith for Greyhound in the 1930s and 1940s.

What we’re listening to

In case you missed it, Alyssa Frystak, our Director of Research and Data Analytics, recently sat down to talk to Danielle Keperling on the Practical Preservation Podcast. They dove into topics like deconstruction, affordable housing, and preservation’s challenges.

Premiering July 5th on PBS, The Neutral Ground documents New Orleans’ fight over monuments and America’s troubled romance with the Lost Cause. In 2015, director CJ Hunt was filming the New Orleans City Council’s vote to remove four confederate monuments. But when that removal is halted by death threats, CJ sets out to understand why a losing army from 1865 still holds so much power in America. Click here to watch the trailer and check your local PBS schedule.