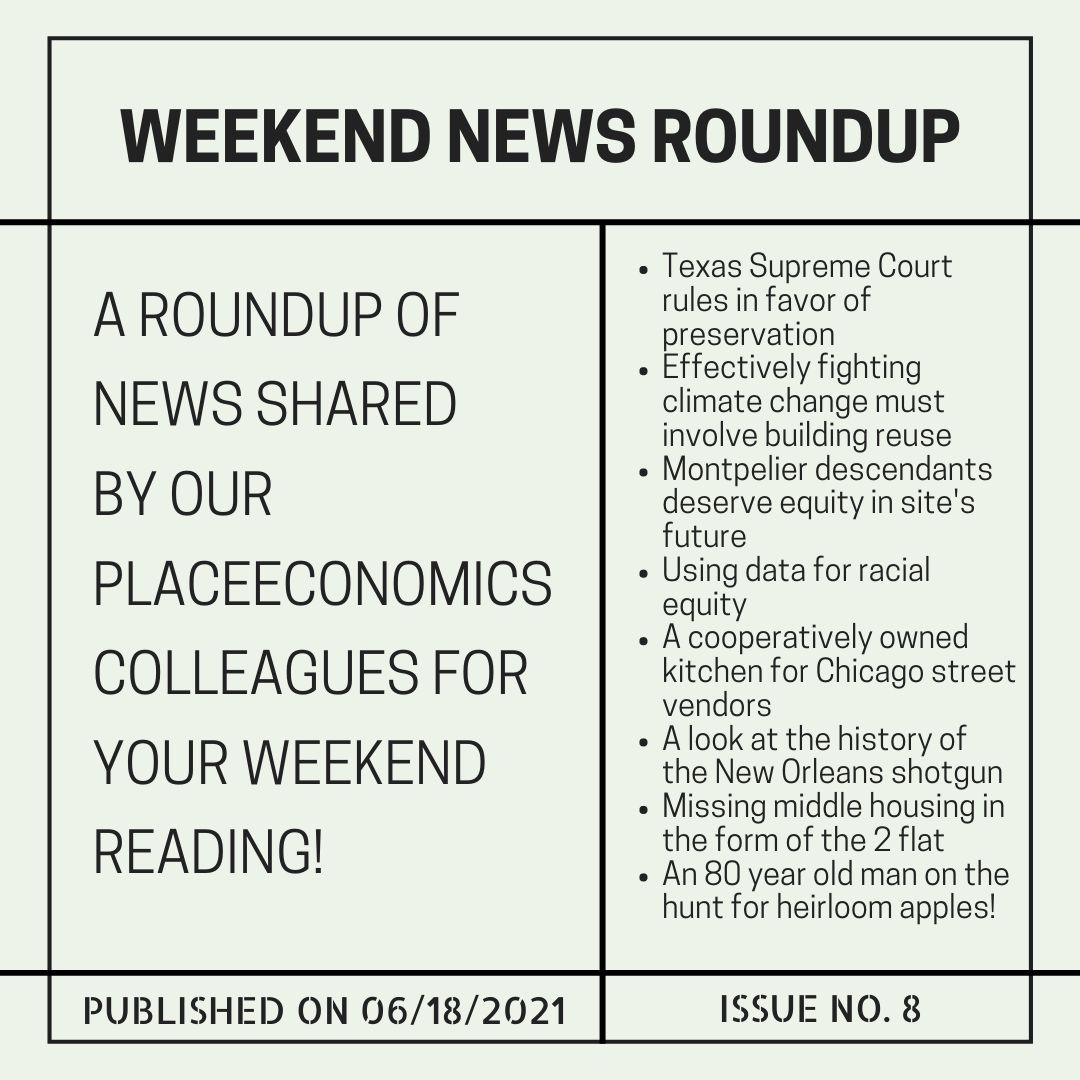 The Texas Supreme Court upheld two lower court rulings in favor of the City of Houston and its Historic Preservation Ordinance! Two residents in the Greater Heights neighborhood challenged the legality of the 26-year old ordinance on the basis that it constituted zoning, which the City of Houston does not have. However, the court found that the city’s historic-preservation regulations do not violate the city charter. You can read the favorable Texas Supreme Court opinion here.

Susan Ross makes the case for retrofitting Canada’s existing buildings as the fastest way to mitigate climate change in this op-ed. Ross points to Canada’s lack of protection for historic buildings and calls for “incentives and impediments to demolition,” noting that the European Union’s Green New Deal plan calls for a “renovation wave.”

James French, chair of the Montpelier Descendants Committee and a member of the Montpelier Foundation Board, writes for the Washington Post about the conflict of interpreting the history of enslavement at Montpelier without shared authority by the descendants of those who were enslaved there. According to French, “The MDC believes that before the true history of Montpelier can be known and shared — including that of the innumerable vital roles played by enslaved people throughout the founding era — the narratives, perspectives and, most important, the authority of the descendants to serve with the Montpelier Foundation (TMF) as equal co-stewards of the museum must be established.”

CityLab released a series about how cities can use data to create racial equity: Part 1 illustrates why cities should stop looking at their data in the aggregate, but rather drill down deeper by breaking information apart in order to get a truer picture. In Part 2, the authors reaffirm what we at PlaceEconomics have believed for years–quantitative data alone can not tell the full story. Qualitative data is necessary, as it provides context and reveals the human side of quantitative data.

In Camden, a nonprofit group has purchased the house where Martin Luther King Jr. lived in 1950, when he performed his first sit-in after being denied service at a Maple Shade bar. The group is prepared to initiate immediate stabilization of the Walnut Street House after years of thwarted attempts to preserve it have left it vulnerable to the elements.

A cooperative of Chicago street vendors have banded together to purchase a commercial kitchen after a long fight to legalize street vending. The kitchen will give the group of 35 vendors–many of whom are older immigrants selling items from tacos, to tamales, to cut fruit–an affordable space of their own to prepare their wares.

Harvard University’s Joint Center for Housing Studies released its annual State of the Nation’s Housing report this week. This year’s report underscores the racial and socioeconomic disparities that minorities continue to face in the housing market, which have only been amplified by the pandemic. You can download the full report and watch the kickoff event here.

The DePaul University Institute for Housing Studies released two reports recently about one of Chicago’s most common forms of missing middle housing: the two- to four-flat. These reports both utilize a highly-detailed level of data to investigate the loss of this residential building type and how it differs in weak and strong real estate markets. The two reports, along with an excellent blog post about the release, can be found here: Report-Characteristics of the 2 to 4 Stock in Chicago Neighborhoods, Report-Patterns of Lost 2 to 4 Unit Buildings in Chicago,  Blog-The Need for a Collective Approach to Preserving 2 to 4 Unit Housing in Chicago

CityLab takes a look at the history behind shotgun houses in New Orleans for their series on iconic home designs that define cities across the world.

An 80-year-old man in Appalachia has been busy hunting down America’s last remaining heirloom apple varieties. Tom Brown, who is a retired chemical engineer, shifted his focus to apple hunting after learning that 14,000 apple varieties were commercially available in 1905, and that more than 11,00 of those are now thought to be extinct. “A modern ‘Johnny Appleseed,’ he’s located and reintroduced 1200 so far, most of which haven’t been sold commercially for over a century, and many of which he cloned from the last known tree of its kind.”

This photo essay by Meghan L.E. Kirkwood documents the ephemeral remnants of Louisiana’s oil infrastructure, many of which have long been abandoned but continue to pollute.