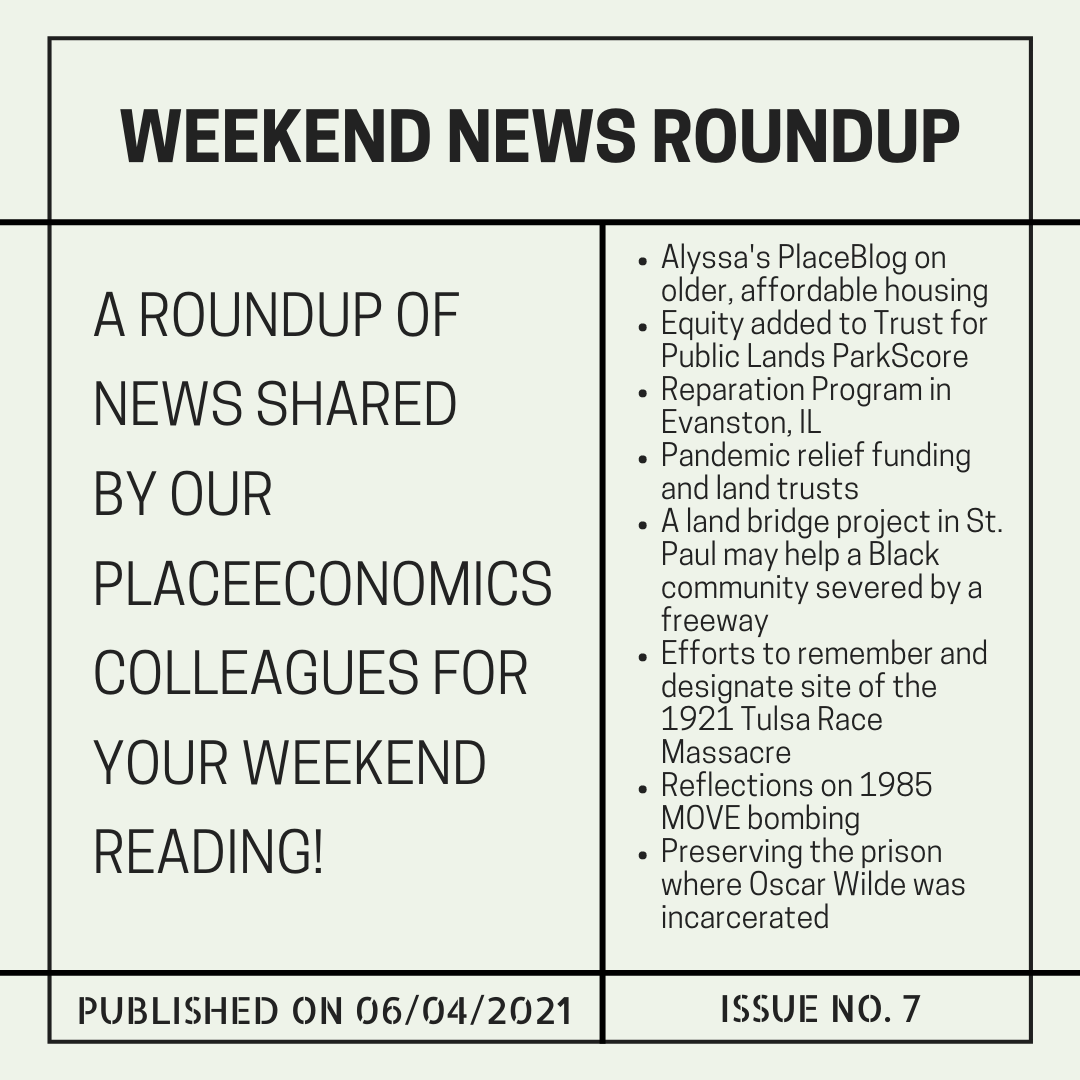 In case you missed it, check out Alyssa Frystak’s recent PlaceBlog about the relative property values and rents in three neighboring multi-family properties in her neighborhood.

The National Trust for Historic Preservation has released its list of the 11 most endangered historic places of 2021. The list includes several sites related to histories of racial and social justice, and historically underrepresented communities.

For the first time in its history, a national ranking of urban green space in America, the Trust for Public Land’s ParkScore index, is not only looking at the number and quality of parks within the country’s 100 largest cities, but also the equity of their distribution — shining a spotlight on the glaring gaps between access to nature along racial and socioeconomic lines.

Our friend Alana Coons wrote a great piece for the San Diego Real Estate Lab on green preservation and conservation.

Years ago, severe floods and hail damaged a number of historic adobe homes in Kewa Pueblo, which sits about 40 minutes north of Albuquerque in New Mexico. Now, the homes are being repaired with the assistance of funding from the CARES Act and the direction of Elizabeth Suina, principal architect and owner of Suina Design + Architecture, an all-Native women owned design firm.

Back in 2019, the City of Evanston, Illinois was, and still is, the first city in America to enact reparations legislation. Funded through cannabis tax revenue, grants will help qualified Black residents buy homes, fix them up, or stay in them. Through this targeted initiative, City officials hope to atone for the discriminatory housing policies of the past by helping families build wealth through home equity. Though modest, the program is a step in the right direction towards rebuilding generational wealth in this Chicago suburb.

Brookings takes a look at how pandemic relief funding provided through the American Rescue Plan could help communities “buy back the block,” by forming land trusts, locally managed neighborhood investment funds, and other ways of “banking” land through collective buying power.

A PBS NewsHour segment shows how in St Paul, a land bridge project may help reconnect a Black community that was severed by freeway development.

Brenda Nails-Alford would like to see the community of Greenwood, where the 1921 Tulsa Race Massacre happened, listed on the National Register of Historic Places, but her efforts have repeatedly been met with resistance. That’s because of a fundamental issue that lies at the heart of the way we traditionally approach historic preservation. According to this excellent story in the Atlantic, “Nails-Alford’s efforts sit at the center of a larger problem: Decades of racial violence and gentrification have transformed Black neighborhoods across the country…In Greenwood, the physical proof necessary to qualify for the National Register was largely destroyed in the massacre and the decades of urban renewal that followed. Without that recognition, the neighborhood’s history is at risk of being distorted, or lost entirely.”

And, to gain a better understanding of what all was lost in Tulsa, turn to this New York Times interactive story that takes you through a 3D recreation, highlighting Black-owned businesses destroyed by the riot. The powerful visuals help spatialize and conceptualize the scale of loss caused.

Akela Lacy writes about another–much more recent–act of government-sanctioned violence towards Black citizens and how it, too, has repeatedly been left out of the historical narrative. In conversation with her mother, who lived blocks away, Lacy reflects on the MOVE bombing in Philadelphia and what recent discoveries and attempts at reconciliation say about how, collectively, we have and haven’t processed the true implications of the event.

In Reading, England, an effort to preserve the prison where Oscar Wilde was incarcerated for being homosexual was temporarily thwarted when Council rejected a 2.6 million pound bid to purchase the property and convert it into a museum and arts center.

In a ruling designed to have far-reaching effects on the world’s largest oil companies, a Dutch court has held Royal Dutch Shell liable for its contributions to climate change, finding the massive energy company’s ongoing fossil-fuel operations to undermine basic guaranteed human rights. The court ordered the company to act immediately to reduce those harms by slashing its global carbon-dioxide emissions by 45 percent by 2030.

Check out this upcoming session from Our World Heritage about new heritage approaches and the challenges to our collective heritage in the 21st century.

That’s our News Roundup for this weekend, but stay tuned for next time, when we’ll share an extensive summer reading list!