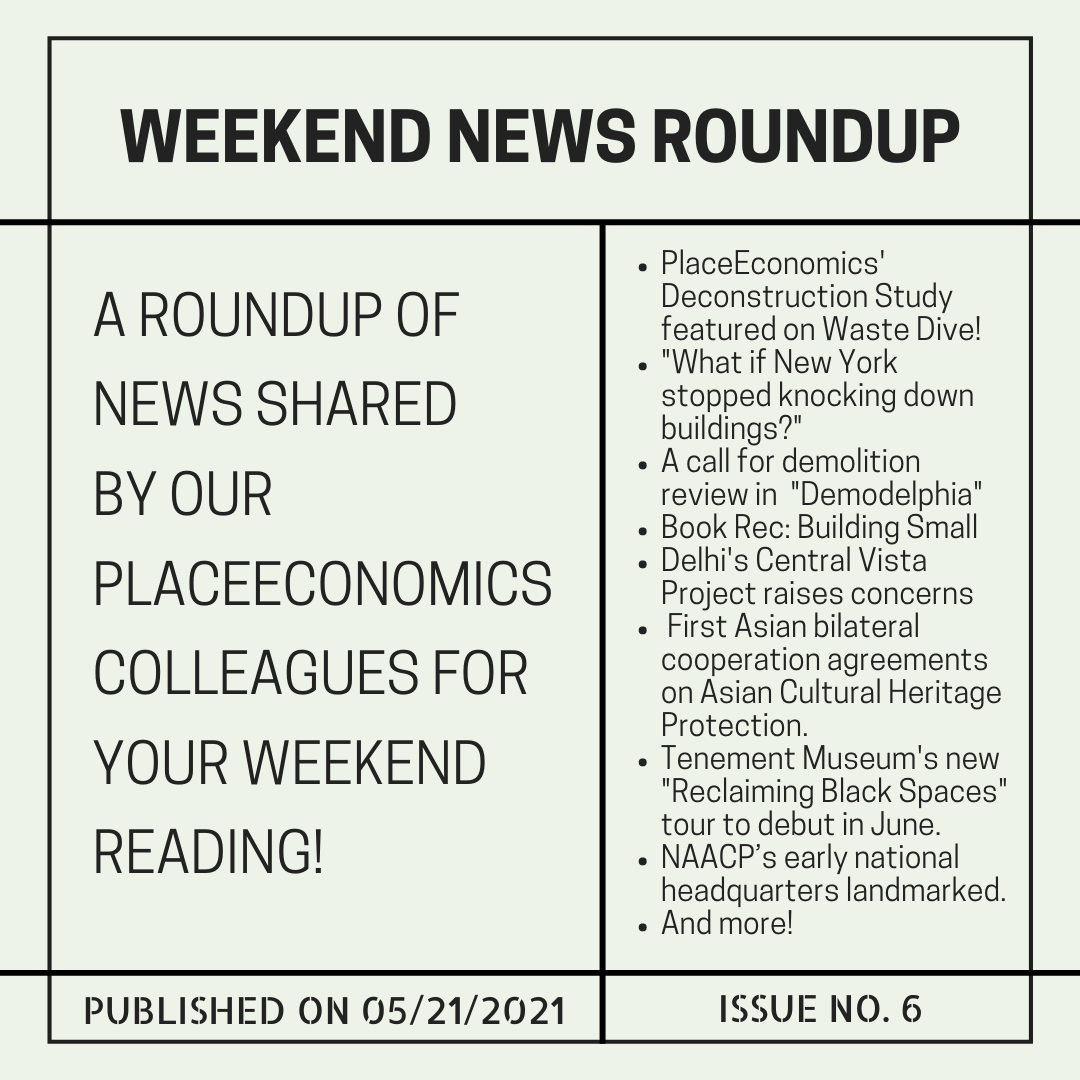 As you read this week’s news roundup, check out Waste Dive’s news roundup that covers topics like collections and transfer, recycling, organics, zero waste, landfills, policy, and more. They recently featured our Director of Research and Data Analytics, Alyssa Frystak, speaking about our recent Deconstruction Study in San Antonio.

It’s exciting to see the environmental argument for preservation of existing buildings getting space in national publications. In Intelligencer, Justin Davidson asks “What if New York stopped knocking down buildings?” and makes the case for reuse as an economic and environmental imperative.

And just a stone’s throw away, preservation writer Ashley Hahn calls for demolition review in “Demodelphia,” in her op-ed for the Philadelphia Inquirer. Preservationists have been alarmed for years that the city, famous for its historic architecture and multifold connections to early American history but chronically underprotected, is facing a demolition crisis.

Our colleague Rodney Swink is reading the Urban Land Institute’s recent publication, Building Small: A Toolkit for Real Estate Entrepreneurs, Civic Leaders, and Great Communities. Drawing on extensive research and using case studies, interviews with over 100 developers, and first hand knowledge gained from tours through15 cities, author Jim Heid articulates what small-scale development means, why it is essential to communities of every size and location, and how entrepreneurial developers and community leaders can help remove the obstacles to small—resulting in more successful projects and a better approach to building community.

Delhi’s Central Vista Project, which will reimagine a stretch of land between Rashrapati Bhavan and India Gate, has raised questions around massive expenditures and loss of heritage, as India fights a devastating second wave of the pandemic. The massive project will include the demolition of numerous buildings, including trees, and relocation of collections and artefacts.

China, Afghanistan and Pakistan co-signed the first Asian bilateral cooperation agreements on Asian Cultural Heritage Protection. The document, “China-Afghanistan and China-Pakistan Joint Statements on Cooperation in the Asian Initiative for Cultural Heritage Conservation,” stipulates that the three countries will participate in “joint archaeology, preservation and restoration of cultural property, conservation, management, and sustainable development of world cultural heritage sites, exchange ideas for exhibitions and preservation technology and the prevention of trafficking of cultural property.”

A photographer in Beirut’s call for heritage preservation after a devastating blast at a nearby port destroyed a broad swath of the city and killed more than 200 people. His photographs were recently featured in Vanity Fair,  and have helped draw attention to Beirut’s architecture. “Beirut tends to be represented in pop culture via xenophobic stereotypes about terrorism, conflict, and war; in movies, as Mrad observes, ‘it has a yellow filter, it seems dusty. None of them really show the architecture or the beauty of Beirut.’”

Lots of news about diversity and heritage out of New York this month! First, the Lower East Side’s Tenement Museum has added a new walking tour that explores the underrecognized Black history of the area. The tour, called “Reclaiming Black Spaces,” launches June 12th, but you can see a preview of some of the stops published in Curbed.

The former home of Black lesbian playwright and activist Lorraine Hansberry in Greenwich Village was recently added to the National Register of Historic Places. Hansberry’s play, A Raisin in the Sun, debuted in 1959 and was the first play by a Black woman to appear on Broadway. The site’s nomination grew out of the NYC LGBT Historic Sites Project.

New York’s Landmarks Preservation Commission also voted unanimously to designate an Episcopal church in Washington Heights and the Fifth Avenue building that housed the NAACP’s early national headquarters. “As part of our equity framework launched earlier this year, we are prioritizing designations like 70 Fifth Avenue and Holyrood Episcopal Church-Iglesia Santa Cruz, to make sure that we are telling the stories of all New Yorkers,” Landmarks Preservation Commission Chair Sarah Carroll told Gothamist.

Miami’s historically Black Overtown neighborhood is seeing a renaissance. Buoyed by a huge surge in tax revenue from new luxury residential developments in adjacent neighborhoods, the Southeast Overtown/Park West Community Redevelopment Agency is providing financing for the renovation and construction of thousands of apartments and townhomes across Overtown. Read this article from the Miami Herald to hear from longtime Overtown residents, business owners, and newcomers on the neighborhood’s remarkable transformation.