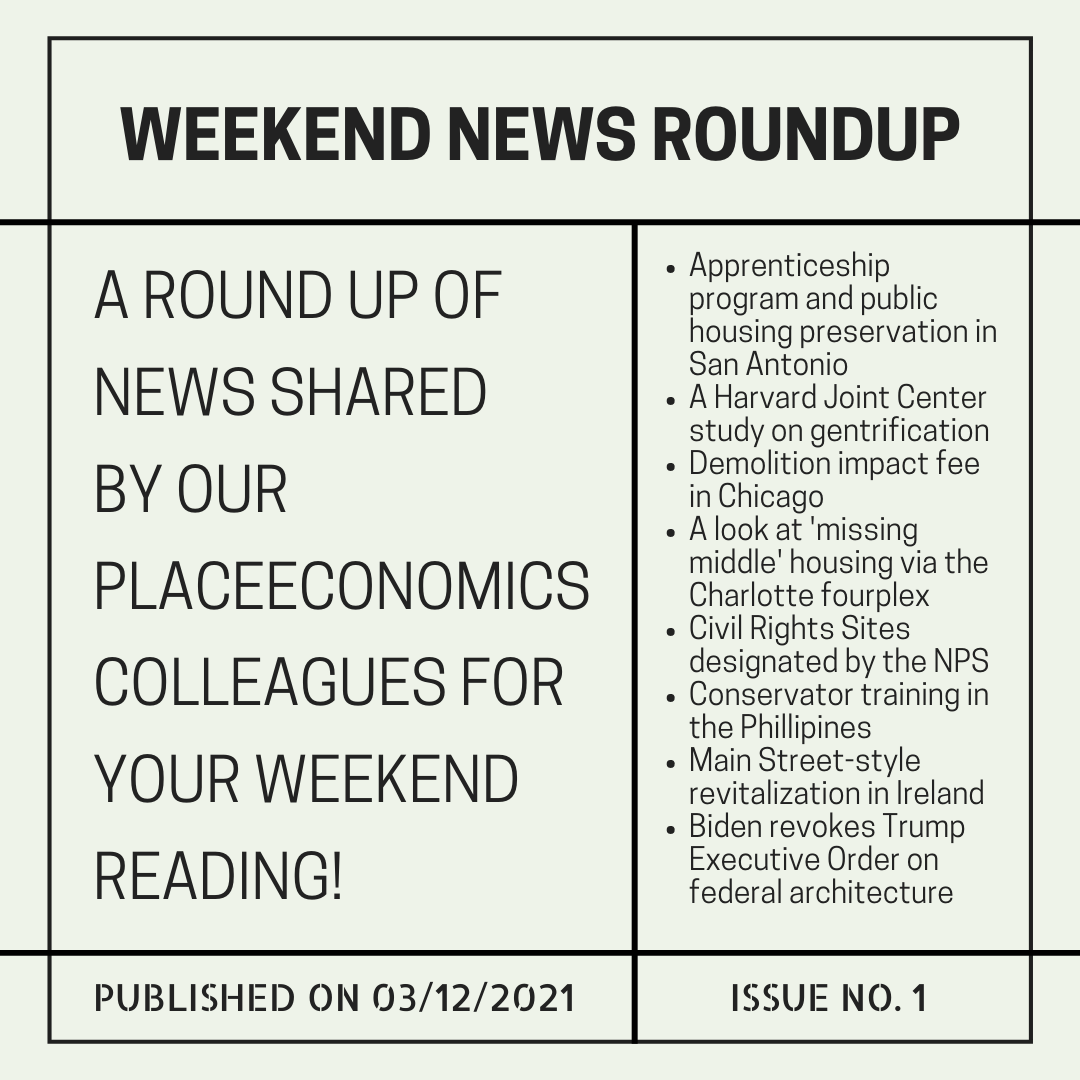 A round-up of news and stories shared by our PlaceEconomics colleagues for your weekend reading!

San Antonio’s Office of Historic Preservation continues to lead the way with smart approaches to preservation, including their new apprenticeship program. “The Wood Window Restoration Certification is part of the City of San Antonio’s Office of Historic Preservation’s Living Heritage Trades Academy.” Through the program, participants receive a one week training, safety training and certification, and 400 hours of on-the-job experience.

In February, Mayor Lori Lightfoot of Chicago proposed a plan for a demolition impact fee to help preserve affordable housing in the Pilsen neighborhood along the 606 trail, which is seeing accelerated gentrification. The measure “would impose a $15,000 surcharge for demolishing a ‘detached house townhouse or two-flat’ and a $5,000-per-unit fee for tearing down ‘multi-unit residential buildings.’” The proposal comes a month after the City Council approved two “anti-deconversion” ordinances aimed at reducing displacement of low and moderate-income renters through the deconversion of two- to eight-unit apartment buildings. Both are part of a larger plan to stem gentrification and displacement in the region.

Just this week, encouraging news in the preservation of public housing as San Antonio changes course to retain the historic Alazán-Apache Courts public housing complex. Previously, the city had been planning to replace the 1940s complex with mixed-income housing, which raised concern over the displacement of the 500 families living there. Instead, the city will begin making steady upgrades to the complex’s units. The solution will likely involve rebuilding the majority of the units in small phases, but families will be able to remain living on site throughout the process.

Our resident data guru, Alyssa Frystak, attended this session hosted by the Harvard Joint Center for Housing Studies that explored the association between gentrification and residential mobility. We at PlaceEconomics were interested in the methodology because it used national, individual-level microdata to compare mobility outcomes for individuals living in gentrifying neighborhoods with similar individuals living in neighborhoods that are not gentrifying. A full recording of the presentation is available online.

And continuing on the theme of affordable housing preservation, read about the Past and Future of the Charlotte Fourplex, an excellent and thorough look at some of the naturally-occurring affordable housing that exists in historic neighborhoods, the issue of “missing middle” housing, and why smaller units like this can be difficult to build today.

At the end of Black History Month, the National Park Service recognized five sites in Detroit for their connection to the Civil Rights Movement. The sites include: Birwood Wall, a 6-foot high wall constructed in 1941 to physically separate Black families from white residents; New Bethel Baptist Church, known as the center of the Civil Rights movement in Detroit; the Rosa L. and Raymond Parks Flat, home of Civil Rights icon Rosa Parks and her husband Raymond, also a leading activist; the Shrine of the Black Madonna of the Pan African Orthodox Christian Church, another leading gathering place for Civil Rights leaders and thought; and WGPR-TV Studio, the first Black-owned television station in the United States.

Women in the Philippines are training to be conservators, thanks to Escuela Taller de Filipinas Foundation. Through the program, women learn trades like wood carving, masonry, carpentry, and building documentation. The conservationists then help with projects managed by the foundation, including “the rehabilitation of heritage churches and sites in over 19 locations in the National Capital Region, Laguna, Pampanga, Cebu, and Batanes.”

Good news for main street-style revitalization: historic town centers in Ireland may see a boost in support thanks to €7 million in government funding seeking to boost jobs in the heritage sector. The money is available through five separate funds comprehensively aimed at strengthening town centers, protecting heritage sites, creating jobs, and protecting wildlife.

LAST BUT NOT LEAST…

And, fans of Brutalism and all who recoil at the idea of fascist-inspired architectural regulation can rejoice knowing that President Joe Biden revoked Trump’s last-ditch executive order on “Promoting Beautiful Federal Civic Architecture” last Thursday.

Have a great weekend, everyone!