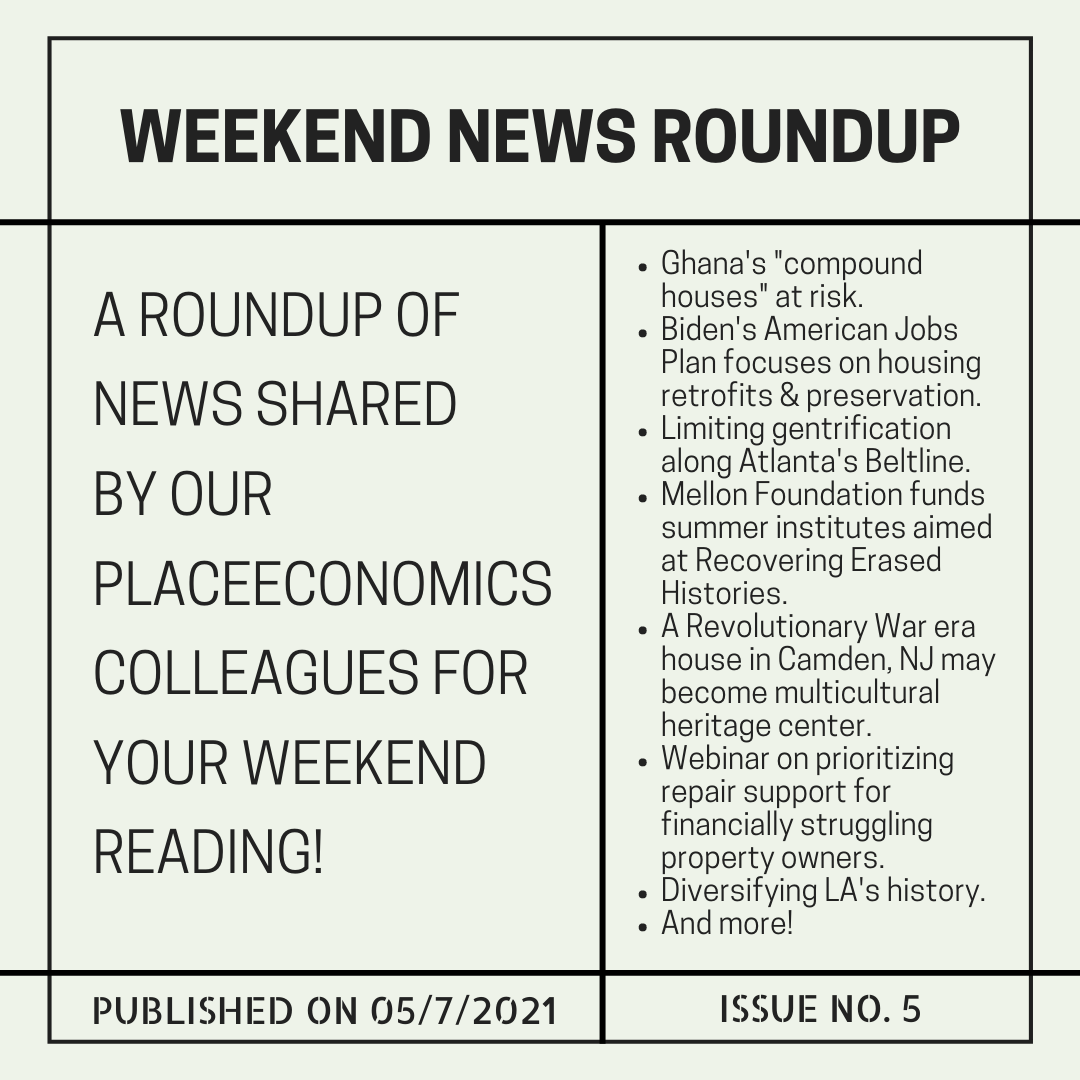 This month, we conducted a PresPoll on ADUs (Accessory Dwelling Units.) As explained in the survey, we described ADUs as “independent housing units that occupy a lot that is otherwise zoned for a single-family home.” Among the key findings were: preservationists are overwhelmingly in favor of ADUs, and importantly, they do not believe that historic districts should be exempt from ADU legislation. Contrary to what one might expect of preservationists, loss of neighborhood character was a relatively minor concern as a possible negative consequence of ADUs. Affordable housing and increased density, however, were ranked as the highest benefits of ADUs. According to these results, preservationists do not fit the NIMBY stereotype so often used against them.

Housing preservation and sustainable retrofits will be a key part of President Biden’s American Jobs Plan, which “will provide resources to build, preserve and retrofit more than 1 million resilient and affordable housing units through an array of resources—grants, energy-efficiency tax credits, public housing capital backlog resources, support for rural housing and new project-based rental assistance.” The plan also calls for the enactment of the Neighborhood Homes Investment Act (NHIA), which would provide funding to construct and rehabilitate more than 500,000 homes in distressed communities.

Efforts to mitigate gentrification along the Atlanta Beltline, a greenway project that created a 22-mile trail loop along an old railroad line, hope to offset rising tax costs for “legacy residents.” The renowned project, completed in 2005, has raised concern about its impact on rising real estate prices and gentrification since its inception. ”Because the BeltLine loops the whole city, more than 20% of Atlanta falls within half a mile of the proposed route, Immergluck notes. That means the BeltLine has had a huge impact on housing markets all over town — not just concentrated in one part of the city.”

A couple of our colleagues attended this webinar series last week on Prioritizing Repair Support for Financially Struggling Property Owners. The webinar explored the programming of the Healthy Rowhouse Project in Philadelphia, an initiative dedicated to improving substandard conditions and health in rowhouses occupied by low- and moderate-income Philadelphians. We highly recommend watching the recording! Property maintenance was already a challenge for many low-income homeowners prior to today’s heightened unemployment crisis and rising construction costs. These circumstances amplify the need for communities to create, enhance, and expand necessary programming to assist vulnerable property owners in preserving the quality of their homes. These investments are critical to the health and safety of residents, the financial well-being of homeowners and the prevention of more significant disrepair and vacancy down the road.

Bloomberg’s City Lab takes an in-depth look at Ghana’s compound houses, a common building type found in Accra built as the city urbanized in the late 19th century. Unfortunately, due to urbanization and growing preference for Western-style single family homes, compound houses are falling out of favor and are increasingly at risk of demolition. The communal houses, which are grouped around mini-courtyards, were typically built to house extended families that had migrated to the city from the countryside and exemplify long-standing building traditions in the region.  “It’s a question of economics but it’s also a question of aspiration and what people consider aspirational,” Biamah-Ofosu told Bloomberg. “We are careful not to overly romanticize compound house living but there is something at the core of it that is better adapted to the way we live. We live much more communally, we support each other much more.”

Also from Bloomberg’s City Lab, this story looked at residential mobility during the COVID-19 pandemic. Despite speculation about emptied urban cores and mass moves to rural areas and small towns, recent data shows most people who did move stayed close to where they came from. Dense core counties of major U.S. metro areas saw a net decrease in flow into the city, while other suburbs and some smaller cities saw net gains. “In other words, people moved outward,” City Lab claims. “Outward to the suburbs of their own core metro area, but also farther out, to satellite cities or even other major urban centers that might still give people proximity to their region.” We highly recommend exploring the interactive graphics and maps in this piece!

The Andrew W. Mellon Foundation is funding the Vernacular Architecture Forum (VAF) and the University of Virginia (UVA) to execute a preliminary series of three summer field schools called the Recovering Erased Histories summer institutes. The field schools will explore new research and documentation methods that are better suited to addressing historical inequities manifested in traditional forms of documentation. VAF and UVA will partner with historically Black colleges and universities (HBCUs), focusing efforts on African American sites and cultural landscapes, while “catalyzing a new and more diverse wave of emerging scholars and practitioners prepared to do this work.”

The Benjamin Cooper House, built in 1734 in South Jersey played a major role in the Revolutionary war. Now preservationists want to use it as a multicultural heritage center and “highlight the role of Black, brown, and indigenous people in the larger conflict.”

A group of historians, artists, Indigenous leaders, scholars, cultural leaders, and thinkers have spent the last few years thinking about what a more honest and contextual representation of LA’s history could look like. The Civic Memory Working group just released a 166 page report outlining their recommendations and an interview with Christopher Hawthorne, who coordinated the group, in the LA Times, discusses some of the findings.